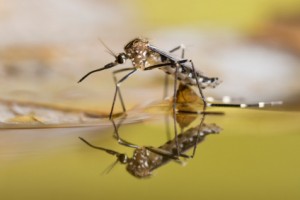 West Nile Virus (WNV) is transmitted by mosquitoes.  The virus causes encephalomyelitis, or swelling of the brain and spinal cord tissues.  Birds are the primary reservoirs for the virus, but many animals may be infected aberrantly, including horses and humans.  Certain species of birds are unable to carry the virus, which instead causes disease and death.  Jays and crows succumb to infection, and the presence of dead birds of these varieties may give evidence that WNV is endemic in the area.  The virus is most likely transmitted via the mosquito from bird to horse, rather than between two horses.  This is because animals other than birds will have very low levels of circulating virus in the bloodstream, making it less likely that a biting insect will become contaminated when biting an infected horse.  This makes the horse and human dead end hosts, so horses cannot give the disease to humans and vice-versa.

The most common symptoms of West Nile Virus in horses are neurological disorders.  These include rear limb ataxia (incoordination) and muscle fasciculation (twitching) in the face, neck, shoulders, and breast.  Symptoms may occur on one or both sides of the horse.  Other neurological effects include increased sensitivity to stimuli (over-reacting to typical sights and sounds), reluctance or inability to stand, and paralysis of the rear including fecal and urinary incontinence.  A horse with WNV may or may not run a fever but will most often become depressed and lose interest and appetite.  Seizures and coma are also possible, followed by death.  Older horses are most susceptible to severe manifestations of the disease.

A presumptive diagnosis can be made on clinical symptoms, but it should be reinforced by positive laboratory results on tests for antibodies to the virus.  Symptoms of WNV mimic numerous other viral diseases, so they are not alone conclusive evidence.  Because of the low circulating levels of virus in the bloodstream, positive identification of the actual virus through DNA testing yields unreliable results.  Collection of brain or spinal tissue is impractical and risky.  A combination of clinical symptoms and a positive test indicating exposure leads to a diagnosis warranting treatment.

Unfortunately, there is no specific treatment for West Nile Virus.  The horse will be treated supportively and symptomatically to help the body combat the virus.  Neurological symptoms are controlled by reducing central nervous system swelling by the administration of anti-inflammatory drugs.  These drugs also help with pain.  The depressed horse that will not eat will be started on intravenous fluids, electrolyte replacements, and parenteral nutrition to prevent dehydration.  Early and aggressive treatment usually lends a better prognosis.  An animal that cannot rise unassisted despite aggressive therapy should be evaluated for quality of life.  Euthanasia may be a more humane option than prolonged suffering.

West Nile Virus is included in the core vaccine recommendations for horses.  Core vaccines are considered to be part of every horse’s regular vaccination regimen.  The diseases they prevent pose significant health risks and are endemic to every part of the U.S., regardless of the use of the animal or housing situation.

Other measures to prevent WNV include controlling mosquito populations.  This can only be effectively achieved by eliminating breeding areas.  Mosquitoes reproduce at incredible rates, so spraying for adults and applying repellant is a very temporary solution.  Anywhere there is standing water is a suitable location for mosquitoes to lay their eggs.  This can include stagnant flood water, poorly drained land, clogged rain gutters, refuse, etc.  Even a discarded soda can may hatch thousands of larvae in a few days.

Hours are subject to change due to inclement weather and Holidays*